The idea behind this fun activity is to copy the first line (or so) of a current read or something you are looking forward to reading in hopes of encouraging someone else to read the same book.

Yesterday, I had the pleasure of attending a book-talk/presentation by Bluebonnet-nominated children’s author, Alda Dobbs at the Freeman Library at Clear Lake in Houston, Texas. It was right down the street from The University of Houston Clear Lake where I am an adjunct professor, so it was an easy trip to make. It was good to see Alda again, our last visit being at my home in Alvin last spring after My Better Half died. She and her beautiful, clever kids spent the afternoon with me and even brought me take out from Mr. Sombrero’s. I posted about it here on PWR as “An Afternoon with an Author.”

Alda was an excellent speaker, constantly engaging the audience with questions and urging them to guess how many or what percent of Mexicans were literate , owned land, etc. The actual facts were surprising. It made the kids realize why the Mexican Revolution happened. She first told about her grandmother, often showing old photographs of what she was describing from newspapers and other sources. Everyone’s attention was focused and engaged.

Her first book, The Barefoot Dreams of Petra Luna covered the escape from the fighting in Mexico to the Other Side of the River (the second book) to safety in the U.S.

…the second book begins at the exact point the other finishes. Here is the first line:

“Thousands of us–the poorest of the poor, the underdogs–choked the bridge and begged for our lives to the gatekeepers, and despite the glistening over the smooth river below us, everyone including me, believed it was the end of our lives.”

How’s that for excitement at the very beginning of the book, and it’s all TRUE! These are the stories Alda’s Great Grandmother told her mother, who then told Alda. One of the most interesting parts of Dobbs’ speech was how she researched and read for years to validate the stories told to her with photos, newspaper articles and history books. It was an afternoon well spent!

The book will be launched September 2nd at the Brazos Bookstore in Houston, Texas. I plan to be in attendance.

This novel in verse is set in a strange situation. The protagonist finds herself left behind after an equally strange evacuation. Dealing with many questions and what ifs, she spends over three years totally alone, learning survival skills as she goes. Her father thinks she is with her mother, and vice versa, and three quarters through the story, she realizes that her parents aren’t coming back for her–the reverse of the thought that kept her going.

Facing martialist looters, wild dogs, and other scary things, the main character deals with the scariest disaster of all: being completely alone. It is a page-turner from the first poem, and one your middle-schooler or teen will not be able to put down.

Learning to teach on line has put me behind on this challenge, so I have read two children’s chapter books for letters “J” and “K.”

The Doughnut King by Jessie Janowitz is a book I would recommend to/for reluctant readers, especially boys in grades 6-8. Tris Levin’s family moves from NYC to Petersville,  due to a family situation. A dying small town, Petersville is very different from New York. Tris, a middle schooler, whose talent is baking, begins a donut business and puts some new energy into the town’s economy. Will Petersville disappear forever, or can Tris’s entrepreneurship save the day? This is a 2019 publication and should be available wherever books are ordered.

“K” stands for Amy Sarig King’s The Year We Fell from Space, which is the story of Liberty and her little sister Jilly who see and discover a meteorite. Is this a sign from the Universe that their mom and dad will get back together after a recent divorce? Will the family fall apart like something that fell from outer space, or will the efforts of the sisters make a difference? The answer might be surprising. It definitely is satisfying. This book was also published in 2019.

For letter “L,” I am continuing to read Erik Larson’s The Splendid and the Vile 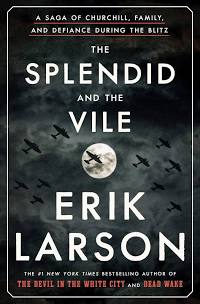 which I’ve had to return to the library, but I have requested it again, and may have to finish it out of order. Later today, I will search my TBR shelves for my selection for the letter “M.” Does”M” mean I’m halfway through the alphabet? I’m hoping to finish this challenge by the end of the year.

Today’s selections are books I read while I was a Cybils’ first round reader for middle school readers last fall. I am happy to mention these books as good reading for this age group.

Beverly Right Here by Kate DiCamillo is for older junior high to early high school readers. It deals with runaways, drugs, and other mature themes. After Beverly’s dog dies, that is the last straw in her troubled family relationship, so she buries the dog and runs away. She is a strong, self-sufficient young woman with whom the reader immediately bonds.

The secondary characters in this novel are strong as well: Elmer, Beverly’s love interest; and Iola, the eccentric elderly lady she meets at the VFW turkey raffle (Iola rigs the raffle, a hilarious plot gimmick). Oftentimes laugh-out-loud funny, the story is also heartbreaking in places. The author’s portrayal of teen angst is spot-on as is her engaging writing style.

Anthem by Deborah Wiles is also a challenging read for junior high through early high school This description of a road trip taken to protest the Vietnam War brings together young friends in a historical novel teens will enjoy.

Nina Soni: Former Best Friend appeals to tweens and younger readers. There are many clever illustrations, and it deals with complex friendships and relationships so prevalent within this age group. A tiny book by Kashmira Sheth (writer) and Jean Kocsmiersky (illustrator), it had its funny moments as well as an adorable protagonist who reminds me of myself with her constant list making. I thoroughly enjoyed this one.

Catch Me When I Fall by Bonnie Graves.  This middle grades historical fiction offering describes “circus life in its heyday.” It’s twelve-year-old heroine, Emma is a “gutsy girl,” who doesn’t know who her father is, and her mother refuses to tell her. After finding an old photo of Fillipo, The Flying Wonder, in her mother’s dresser drawer, she disguises herself as a boy and runs off to “join the circus” and find her father. What she finds and discovers about herself in the process is a coming-of-age tale any middle school reader will be enthralled with.

Another twelve-year-old heroine in Extraordinary Birds, a puzzling novel by Sandy Stark McGinnes, is a girl named December who bears strange scars on her back. At the beginning, December feels she is secretly a bird, and the scars are the places that will one day sprout wings.  The true story of the scars is something she has blocked out of her memory.  Confronted by the “mean girls” at her school, and protected by her best friend, Cherylynne, December faces the truth about herself and comes into her true identity. This is a powerful story that will be remembered by its readers for a long time.

PWR is a group of women who love to read and love books. It wants to share this love with any and all who will join them.
Join 370 other subscribers
Loading Comments...